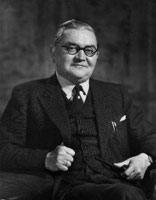 41 Club is the pet name for The Association of Ex-Round Tablers’ Clubs. Prior to April 2008 it had been called The Association of Ex-Tablers’ Clubs for many a year, the “Round” being deliberately left out to dispel any misconceptions that it was a sort of senior Round Table. Now, with the passage of time and this name change, its place in the “Round Table Family” is perhaps more recognisable to those outside.

In March 1927, a young Rotarian by the name of Louis Marchesi became aware of the lack of opportunities for the young businessmen of the day to meet and prepare themselves for their responsibilities as senior businessmen of later years. Being a member of Norwich Rotary Club he found himself surrounded by older men, so he started a club for young men in the age range of 28 to 40 to give them the right environment to develop their professional and civic skills whilst assisting the local community, the nation and later the world as whole.

Round Table was formed after being inspired by a speech by the then Prince of Wales who said – “The young business and professional men of this country must get together round the table, adopt methods that have proved so sound in the past, adapt them to the changing needs of the times and wherever possible, improve them”. Round Table not only immediately took its name from this speech but also the other key words “Adopt, Adapt, Improve” as its motto. www.roundtable.org.uk

Three years after the formation of Round Table, an equivalent women’s club was formed called Ladies’ Circle (known colloquially as Circle). Since 1993, Circle has an open membership and accepts not only partners of Round Tablers and Ex-Round Tablers but any women in the age range of 18 to 45. www.ladies-circle.org.uk

The Founding Fathers – The first group of retiring Round Tablers – or rejects, as they are sometimes known – got together in Liverpool as early as 1936, having been inaugurated in November 1928. Under the chairmanship of one R.H. Roberts, these ex-Tablers met for lunch on the first Tuesday of every month, with three winter evening meetings, and opened their doors to any ex-Tabler – not just those who had previously been with Round Table Number 8. Next was Wolverhampton Notables who were formed in 1937 by a few over-forties. At this time they were not interested in any form of association, having already made up their minds that “no rule nor regulation that was ever conceived could dictate what companionship meant.” Following these, on 13 April 1939, a London Old Tablers Society was formed – apparently without having any idea that the Liverpool club even existed. And so on………..

Tangent LogoTangent is the equivalent to 41 Club for a past member of Ladies’ Circle, or the wife or female partner of a current or past member of Round Table. Their first club met in 1953 and the National Association was formed in 1969. Tangent too, since 2009, has had an open membership policy. www.tangent-clubs.org

Currently, there are almost 18,000 declared members of 41 Club and it continues to assist Round Table in many of its activities and also Circle and Tangent. This “Four Club Family” meets regularly to further common aims.