This coming Sunday, 21st July, is Ladies Day at Stratford Races and we are having a social meeting \ picnic, meeting in the centre of the course from 1:30 onwards, first race 2:30. Tickets are £10 per adult (cash only) at the gate and there is free admission for accompanied under 18’s.

The weather looks to be set fair and if you are not into betting it doesn’t matter, come along anyway and enjoy the atmosphere, good company and fellowship. 41\Table\Tangent\Cirle\Guest and friends all welcome.

With his enforced absence from our meetings due to his broken hip, Ian Brown, Richard Lewis and myself went to see Stan and present him with his Presidential chain. 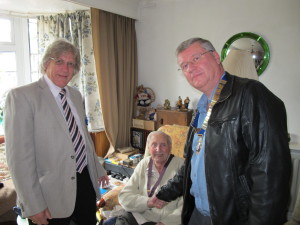 As usual Stan was in good form and even managed to make a short impromptu response that Richard managed to capture on video whilst also taking photos. The video is available to view here:

Whilst we were with Stan he mentioned that he had been let down by Birmingham Council with respect to clearing his garden so that he could get it maintained. Richard offered to come over with Ian and myself as it “wouldn’t take long”. I also put out an appeal for other members to assist but in the end it was just the three of us on what turned out to be one of the hottest days of the year so far!

I was not a lot of help, only able to “foot the ladder” during hedge trimming and clear up some of the off-cuts. Both Richard and Ian worked like Trojans all day, not finishing until around 5:30 having got “stripes” on the first area of lawn, removed masses of ivy and cut several feet off the hedge and a holly tree and generally trimmed and strimmed. Stan has already sent a thank you note and I would like to add my sincere thanks to them both. The approach to the house and the first part of the rear garden are now in order and able to be kept by the gardener Stan has lined up. If we had had a couple more helpers we may have also been able to attack the back area of the garden that is very overgrown, but that has been left for another day, unless there are others that would be willing to give it a go or perhaps some younger and fitter Tablers available?

The cost will be the same as the last two years at £37.50 each for which the following items will be available

–    Bacon sandwich and coffee on arrival

You are invited to register either individually or as a team of 4 players.

The event has always been a very popular and convivial occasion with players returning year after year, and I look forward to welcoming our regular participants and any new competitors who would like to join us this year on 26th July, which is a week after the Open Golf Championship at Muirfield.

Please see the attached flyer for the City of Birmingham 60th Charter Night.

That’s all for now folks,

Yours in continued friendship